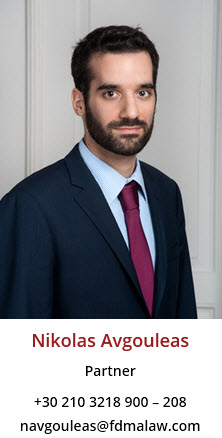 Nikolas joined the firm in 2009, following his apprenticeship since 2007

He is an expert in public law and specializes in the areas of public procurement (public contracts), privatizations, public, and energy law.

In such fields, he advises and handles dispute resolution cases (before State’s Courts and Courts of Arbitration) for major international and Greek clients.

Recent highlights of his work in the fields of his expertise include:

Member of the Athens Bar Association since 2009. Qualified to practice before the Court of Appeals.