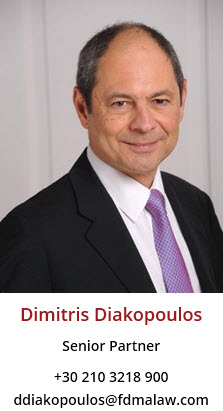 Dimitris is a founding partner of the firm

He is the head of the firm’s M&A, privatizations, projects and commercial transactions division.

He has a broadly based transactional and legal advisory practice and has acted in numerous mergers and acquisitions, privatizations and major transactions.

His experience includes also advising clients in the fields of energy, telecommunications, high technology and broadcasting, including the broadcasting of the Olympic Games.

Dimitris is fluent in Greek, English and French.

Dimitris is the author of several published articles and a frequent speaker on issues of Greek business law, energy law and privatizations.

Member of the Athens Bar Association since 1986. Qualified to practice before the Supreme Court.