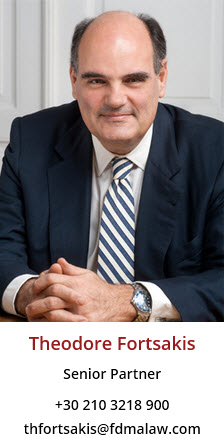 Professor Fortsakis is a founding partner of the firm

His practice focuses on administrative and tax law and is recognized and respected as one of the most eminent practitioners in the fields of public law and taxation.

Prof. Fortsakis has represented numerous domestic and foreign entities and private clients over the last thirty years before the administrative courts and the Council of State.

He also has vast experience in advising and providing legal opinions on all tax objects and international business transactions.

Prof. Fortsakis is or has been:

Prof. Fortsakis is the author of numerous books and more than 130 articles in Greek, French and English.

Member of the Athens Bar Association (since 1981). Qualified to practice before the Supreme Court.